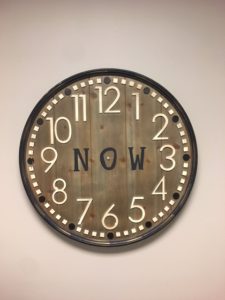 This is a picture of my handless clock in my office. We don’t want to wait until all of our emotional stress or problems are resolved or gone before we truly start to live our lives. As we know, there will never be a perfect situation where we can “finally” start to live our lives in a direction we care about. It will always be something. We can start now. We want to take the demons and stress with us, and live a life we care about in spite of these negative experiences. We can’t wish it away or perform enough rituals to make it just disappear. It’s not that we want the demons and stress to hang out with us, they just beat us down. Let them be there though, fight them by not fighting them, and they can fade into the background where they belong. If we continue to avoid them or try fix everything or make it just right, we are often very disappointed that these things just get bigger the more we try to rid ourselves of our struggles. We see this over and over in OCD, with the endless and senseless rituals. Some things can be resolved, some can’t. Lets do what we can with what we have, demons and all, and lean into a life that we care about. 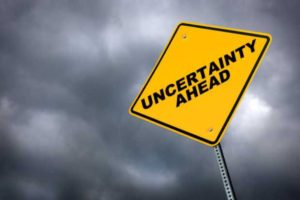 Learning to live with not having all the answers, uncertainty, is a great place to start, and remain, when dealing with OCD. Accepting that our lives are filled with uncertainty can bring some freedom from the aches and pains of experiencing tormenting thoughts. 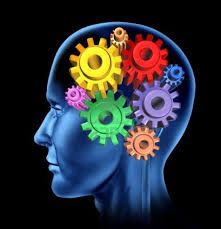 The demons are really heavy in our hearts and minds some days. The good news is these emotional “demons” are in our head. Yes, there will be extremely difficult aspects of our lives. We all know this difficult truth. We will often have the urge to kick the demons in the teeth. These struggles can knock us to the floor and take the wind out of our sails. We continue to “fight” OCD by responding differently to its ridiculous demands. Attempting to stay in the moment, using exposure to face our fears, and then responding differently without rituals and compulsions, is how we continue to gain freedom from this heavyweight fight in our mind.

Let us remember those that have passed. Let us also push forward and do our best to remain present and enjoy our time here as much as possible……. Despite what the negative noise in our mind tries to pull us into. 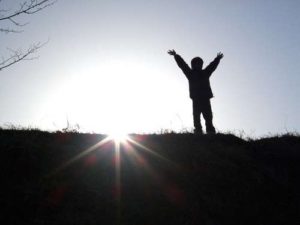 Sometimes letting go of the struggle can be a very therapeutic tool. There is an old saying about “hitting rock bottom once we stop digging.” There is a lot of truth in this. If we Embrace the negativity instead of trying to avoid it, it can be a form of acceptance and can be very helpful for our emotional health. We want to keep moving forward, one hour at a time. Moving forward doesn’t have to mean fighting against or trying to stop or hide from irrational thoughts.  With OCD we see that we “fight” the demon or irrational thoughts by not responding. We can let the villains come along for the road trip, but we will not be sharing our trail mix and beef jerky along the way. Let’s Embrace the villains and realize that they will continue to starve off the less we feed them our time and energy.

“I have been guilty of kicking myself in the teeth.” -Jerry Cantrell, Alice in Chains 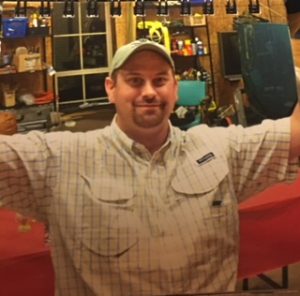 Today is the one year anniversary of the last time I got to hang out with my Brother in law, Tyler. Tyler, myself, my nephew Jack, and my hero, Heather, went to eat at Razzoo’s then went to see Star Wars. This is a memory that I will forever cherish. I was at his side 3 weeks later when he passed however he was unable to communicate. I bought a candle today and came home and lit it for Tyler.

I wanted to give a shout out to Tyler McGuire for being the strongest person I have ever known. We miss you so damn much, brother. Your spirit will always be with us and we talk about you all the time. We will see you again. Love u, bil. Veritas. 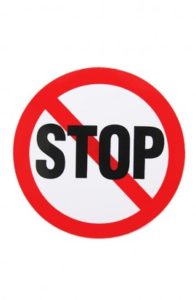 When reading the title of this post it appears that I might have left the word “NOT” out of the sentence. That was on purpose. We all have situations or struggles that cause us distress and so we might try to “not think about it.” We know that trying not to think about a green bear will only lead to more green bears dancing around in our brain. We obviously don’t want to seek out misery just for the sake of making ourselves miserable. If we struggle with OCD or other emotional difficulties, we do want to lean into what’s bothering us so we can start to make changes that can lead to a more enjoyable existence. We want to start responding differently. If its OCD, we want to get away from the compulsions and rituals. If it’s a grief situation, again, we want to lean into it and try to respond differently if we are completely avoiding it or making it worse for ourselves. Grief doesn’t have to be this constant kick to the chest. We know that it can often feel this way but there is hope.  It can be extremely difficult to seek this stuff out on purpose, however embracing this sadness or struggle can free us from some of this emotional hell that we may experience. Let’s lean into the darkness so that we can have a chance to see more light. Lets also lean into each other for support. Keep pushing forward, one moment at a time.

I recently went to the movies and watched the new version of Murder on the Orient Express. This is the murder mystery that is based on Agatha Christie’s novel that was published in 1934. The main character is a detective by the name of Hercule Poirot. Poirot’s character is often shown to be “obsessive-compulsive” in her writing, as well as the movies and tv shows that are adaptations of Christie’s writing. There have been several Poirot portrayals over the years. I appreciate the handful of shows and movies that I have seen over the years that are based on Christie’s writings. Her body of work speaks for itself. I am not an expert on her writing, but I have noticed that this character is often tied to discussions about being “OCD.” I obviously can’t speak for Christie on her creation of Poirot. In this current version of the film, Poirot makes some comments about symmetry while eating his breakfast as well as commenting on how a man’s tie is crooked. At one point, the character steps in something while walking down the street. He comments about needing the balance on the other shoe as well, after he accidentally stepped in the mess with just one foot. He purposely stepped in it again with the other foot then seemed okay at that point to literally keep moving. This character seems to appreciate cleanliness, symmetry, and feeling: “just right.”

There is more and more OCD awareness that is being spread throughout our society. We still have a long way to go but this is great news! More and more articles and discussions are happening regarding the term “OCD” being thrown around so casually in our society. Examples include: “I’m sooooo OCD about my car.” Or,”She’s so OCD, she doesn’t let anyone walk in her apartment with their shoes on.” As we know, the term “OCD” is often said inaccurately. We know that OCD is much more that wanting “cleanliness” and symmetry. OCD can be pure torment, it often wreaks havoc and we know it goes much further than this. Poirot is a fictional character and I don’t know if he has “OCD” or not, I really can’t be certain.:) In my opinion, the actor who portrayed Poirot, Kenneth Branagh, did an excellent job.

I can’t help but tie music and movies into talking and writing about emotional health. Listening to music and watching movies have been helpful coping skills of mine for many years. There is a part of the film where Poirot explains that life is not always fair regarding justice being served. He explains that he will try to: “learn to live with the imbalance.” Learning to live with the “imbalance” is exactly what we want to do with OCD. We try to get it “just right” and we see that getting it “wrong” or “imbalanced” is what leads to more freedom in our lives. LESS RITUALS CAN LEAD TO MORE PEACE!! I’m with Poirot on this one, I’m going to continue to try and live with the “imbalance.” 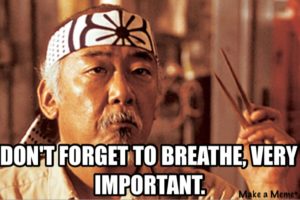 Just a reminder from the great character that Pat Morita played in Karate Kid. No matter where we are or what we are doing, our breath obviously goes with us. It times of great stress it can be a helpful “grounding” technique to just follow our breath. We don’t need to overanalyze it or turn it over in our mind a thousand times, just simply following our breath. Let us pay attention to how it actually feels as we take a breath. We get so caught up in our hectic lives we often forget what a miracle it is that we are even able to breathe. 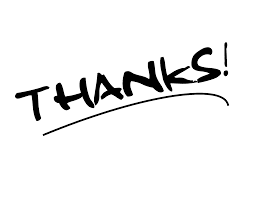 THANK YOU, THANK YOU, FOR WATCHING AND VOTING FOR OUR VIDEO: MR CERTAIN STRIKES OUT, VOL. 1 !!!  We really appreciate it. Thanks to IOCDF for presenting OCDWEEK. The International OCD Foundation continues to push ahead, educate, support, and helps fight the stigma.

Mr Certain will return, however we already know the ending of his next adventure……… and that’s a good thing! 🙂